EV’s in Australia – an update

Australia is a huge country with large distances between its major cities. This makes the charging infrastructure of the utmost importance. 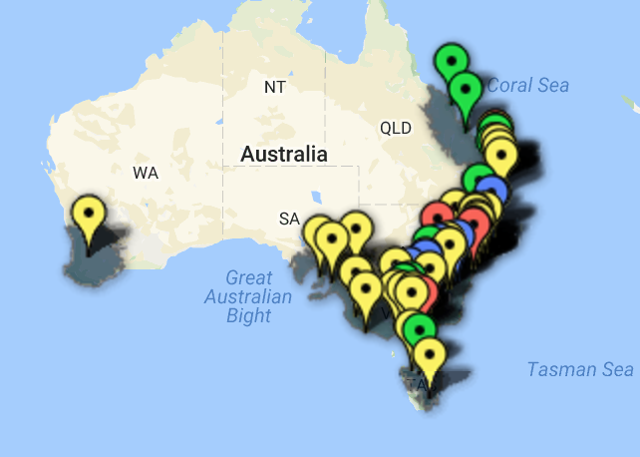 This is set to change rapidly. The current 13 superchargers will be extended by a further 12 currently under planning and construction. Effectively now the major population centers of Australia are connected for Tesla drivers. That is to say, links between Sydney, Melbourne, Brisbane, Adelaide and Canberra. Perth in Western Australia is closer to Indonesia’s capital of Jakarta than to any major Australian city so no one really drives there from elsewhere in the country.

State capital Adelaide has the ambition to be the first carbon-neutral city in the world. The city has seen a partnership between local utility SA Power Networks, Mitsubishi and Tesla are providing super-fast direct current charging stations around the city. Nineteen of these stations will be up and running by the end of November. A further 25 will be in place by mid-2018. EV drivers in the city are now linked with Melbourne and Brisbane.

The Queensland State Government is inaugurating its “Electronic Super Highway” with charging stations linking Brisbane with Cairns (a distance of 1682 kilometers).

In Western Australia Tesla has just inaugurated its first Supercharger station, pictured below: 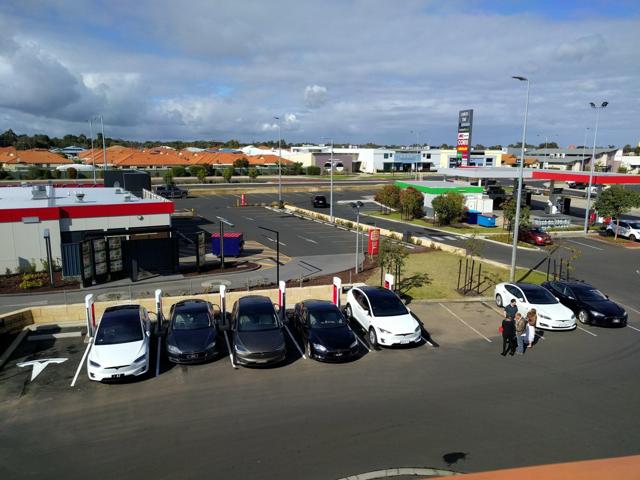 This opens up the southwest of the state from the main population center of Perth. Additionally, the state’s biggest retailer, Syngenta, is setting up over 70 standard charging points in the next few months, with encouragement from the state government.

An example of how Tesla can thrive all around Australia is their recent agreement with Australian retail giant Stockland. The retailer (not Tesla) is investing A$200,000 in installing Tesla Destination Chargers at 31 of their shopping centers across the nation. These are of course not as powerful as Tesla Superchargers which provide 270 kilometers of range in 30 minutes. They do however provide 110 kilometers range from one hour of charging. That one hour spent in a shopping center is the carrot for Stockland.

Of course charging at home is the cheapest option. This is a popular option among Tesla’s Australian users as people generally live in houses with plenty of space. However, a recent survey in Western Australia was interesting. It found that using roadside commercial charging stations, the cost of a 100-kilometer trip was:

So even charging on the road provides huge cost savings compared to petrol or diesel autos. The drive in demand for EVs in Australia is coming from the bottom up, from consumers and from state governments.

Apart from range anxiety, the EV market in Australia has been somewhat hamstrung by a lack of government incentives. This is partly due to the strong fossil fuel lobby in this resource-rich country. There is still a debate at central government level about the level of renewables the country needs. There is less of a debate at the state level.

The Australian Electric Vehicle Association (AEVA) reckons the average motorist wants a car with a 250-kilometer range before they will consider buying. This, of course, is advantageous to Tesla against the competition. The Nissan Leaf and BMW i3 being offered on the Australian market have a range of between 170 kilometers and 200 kilometers. Tesla models far exceed that.

There are 18 million vehicles on the road in Australia, but the AEVA reckons EVs will only become a majority of the total sometime between 2032 and 2039. It is estimated that there are somewhat over 2,000 Teslas in the country. Sales have ramped up substantially this year. That is out of a total of about 5,000 EVs on the road in total. The small quantity should not, in my opinion, be seen as a negative factor but rather a positive one. It shows the potential to be fulfilled.

Government incentives are likely to be the key element in whether EV growth speeds up. The measures being adopted by state governments are key here. Even if the federal government drags its feet, the powerful state Governments may well accelerate the process. Something similar is being seen in the US. States such as California are putting in place measures to meet consumer demand against a federal government in thrall to fossil fuel interests.

In the US the conventional auto companies and the fossil fuel industry have historically been able to influence the federal government against new energy vehicles through their strong lobbying power. In Australia, there is no longer a domestic auto industry to lobby the government, and individual state governments are powerful. What has started in South Australia looks set to get extended to the other states quite rapidly.